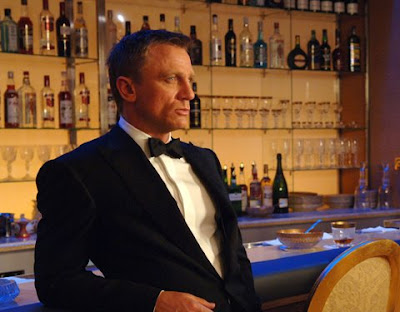 Over the weekend, Eric and I decided to watch the latest James Bond film, Quantum of Solace. As a preface to seeing the new film, we watched Casino Royale again as well. I am a huge fan of the James Bond films, and after being so inspired I decided to institute the Sunday Night Cocktail. Eric and I have an extensive liquor cabinet at home and very rarely plumb its depths. As Sunday nights seem to be our at home date night, I felt that it was a perfect opportunity to try out a new cocktail each week. Of course, this week’s inspiration came from Bond himself, the Vesper. Here’s a little backstory from Wikipedia…
“The drink was popularized in the novel Casino Royale (1953) when ordered by its inventor, secret agent James Bond (Agent 007), to commemorate his strong feelings for its namesake, Vesper Lynd. Although there have been a teleplay and two films based on this book, the signature cocktail was only mentioned twice in the recent Casino Royale (2006 Film): when he ordered it at the poker table and several others followed suit, and when Bond states that he named the drink the Vesper, because once he tasted it, it was all he wanted to drink. The cocktail is also mentioned by its ingredients in Quantum of Solace, but Bond does not refer to it by name.
Because these movies were set in the present-day but Kina Lillet has not been available since the early 1980s, its mention in the recipe in these movies is anachronistic.”
Eric purchased the required Lillet Blanc for making the drink back in 2006, when Esquire printed an updated version of the drink. Wikipedia, indicates that the Esquire recipe is slightly off, due to the recipe having been given in measures not ounces. So, here is the Esquire recipe with the required tweaks: 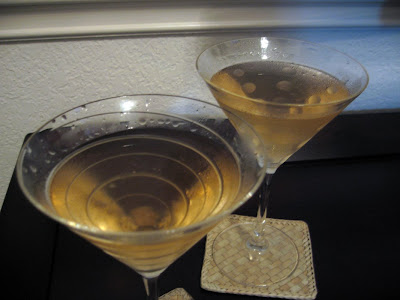 Vesper
Shake (if you must) with plenty of cracked ice. [Mix] 4 1/2 oz Tanqueray gin, 1 1/2 oz 100-proof Stolichnaya vodka, 3/4 oz Lillet Blanc, 1/8 teaspoon (or less) quinine powder or, in desperation, 2 dashes of bitters. Strain into a chilled cocktail glass and twist a large swatch of thin-cut lemon peel over the top.
We lacked the lemon peel garnish, but otherwise the cocktail is an accurate representation. I am not a huge fan of martinis to begin with, but the Vesper wasn’t bad. 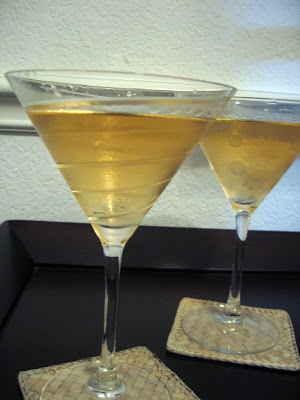 Bond laughed. “When I’m…er…concentrating,” he explained, “I never have more than one drink before dinner. But I do like that one to be large and very strong and very cold and very well-made. I hate small portions of anything, particularly when they taste bad. This drink’s my own invention. I’m going to patent it when I can think of a good name.”
-Ian Fleming, Casino Royale