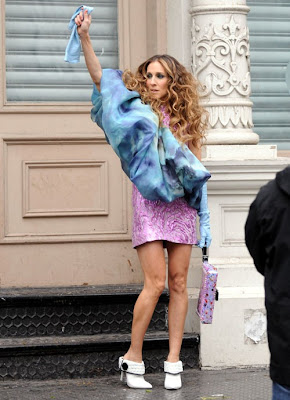 Of course, like a lot of other women out there I have the SATC movie on the brain. You also, of course, know that I’ve been trying to be a little more daring with my wardrobe, bringing the bar up a notch. So, when you combine those two things, all hell breaks loose.
I have many new purchases to share, but for right now I wanted to discuss an item that has been in my closet for a couple of years (maybe three) and has never been worn. I am speaking, you may have guessed, about a pair of white ankle boots. Eric bought them for me when we were shopping for shoes for me to wear on our cruise to the Bahamas. They were so comfortable when I tried them on in the store, that I didn’t argue when he bought them. But, I’ve never quite figured out how to wear them without them looking all 1980s on me. I suppose if I don’t wear them with acid washed jeans and an off-the-shoulder shirt (a la Flashdance), I’m good. But, still…I haven’t quite figured out how to work them into my wardrobe. 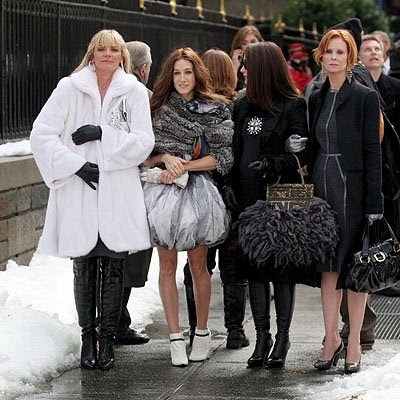 So, two things have ocurred that have changed my thought process on them. First, I went to see SATC (post on that to come later), and of course noticed Carrie’s white ankle boots in the film. And secondly, in my new job I am feeling a little more daring with my fashion choices, because no one knows me here. Perhaps it should really be a time when I am trying to be toned down, but I am feeling like being a little risky in my choices – at least to the extent of trying out some new things. If they don’t work, they don’t work.
So, basically Carrie pairs her boots with short skirts or mini dresses. I’ve even included a photo from Season 6 where the boots make an appearance. Since mine are taller than these, they probably won’t work in quite the same way. 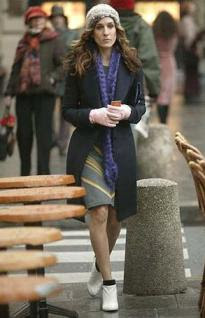 Of course, the white boots with pajama pants is always an option (not). 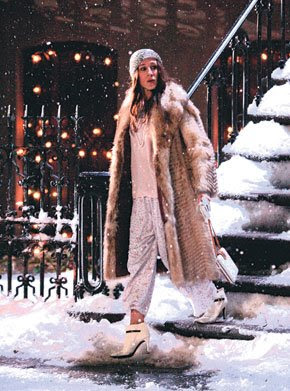 So, I’m thinking it’s summer and I’ll give it a go and see how it works. I’d love to pair them with a skirt but I don’t think I’m quite that daring, so I’ll have to settle for pants. Just need to figure out the details, but I think I’ll try it. Why not? 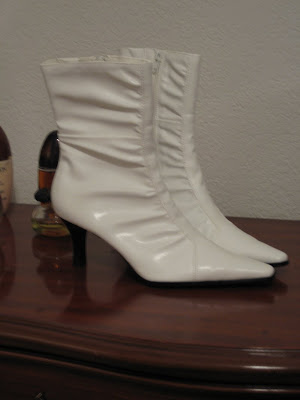