Home » We Wish You a Merry Christmas

With it being just a few days before Christmas, I thought I’d share my Christmas decorating for this year. Last year I was in such a fog around this time of year, after losing Hamlet that I didn’t put a whole lot of effort into the house. This year, I really enjoyed making our home feel cozy and joyful. Somehow, though, I seem to be missing several things and I’m not sure where I put them when I took everything down last year…oh well…they’ll probably turn up next year! 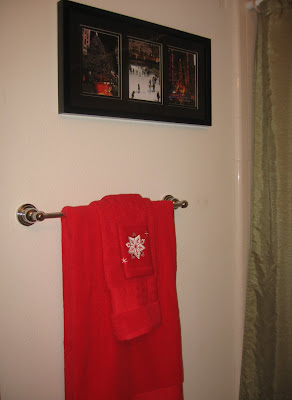 This year I decided I really wanted some red linens for the guest bath. Eric picked these up at Target for me, and I just love them! I hung the framed photos from our trip to NYC last December. These are of the tree at Rockefeller Center, the ice skaters there and Radio City Music Hall. 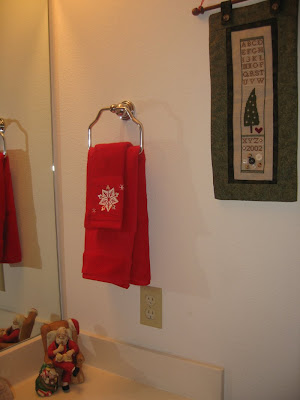 I also got out my Santa music box that my parents gave me years ago. Since they go to visit my sister for Christmas, they’ve quit decorating their home. So, a few years ago they gave some things to me and some things to my sister. They had several different ceramic music boxes, and this is the one I received. I don’t know that I’ve ever put it out before this year. On the wall is my Primitive Tree piece I stitched in 2002. 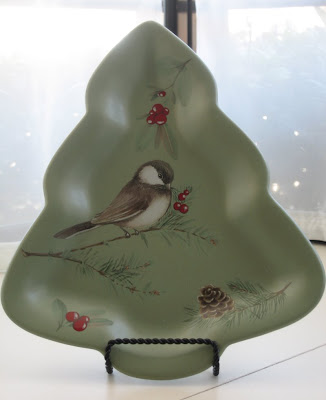 I also came across this tree plate that I’d purchased a number of years ago, and have never used. I thought it would be a cute touch in my kitchen window. For whatever reason, I also have a matching gravy boat. Maybe I’ll look into putting a small arrangement in that next year. That might be fun.
Of course, the majority of my decorating takes place in the living room.

I purchased these wooden angels years ago in Salado, Texas at a little place called Horsefeathers. I thought they were so fun and primitive. They have wings made out of window screen. 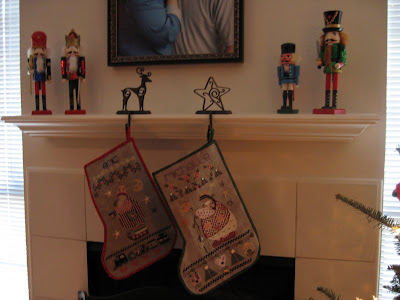 I have always loved nutcrackers. Growing up my parents used to take us to see The Nutcracker ballet every year in December. One year, they gave me my very own nutcracker. I’ve never decorated with them, but since this seems to be the year for doing things differently I thought I would. Eric bought the three larger nutcrackers for me this year, and of course I had to include my childhood gift in the display. I love the simplicity of my mantel this year. The stockings I made year before last for each of us. And this year, they’ve actually got gifts in them! 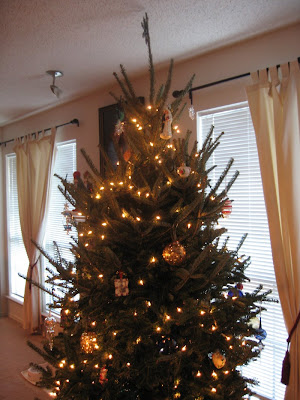 Of course there is the tree too. Eric loves (and grew up with) having a live tree, so that’s what we have. We decorate with white lights and mainly blown glass ornaments. Each year I give Eric a Swarovski ornament, so there are three on the tree so far, as well. When we travel, we tend to buy an ornament as a souvenir, so we’ve got a few of those too. For example, for our first anniversary we went to San Antonio. The first night we were there, we found a little blown glass studio next door to the restaurant we had dinner at, so we purchased an ornament from them. 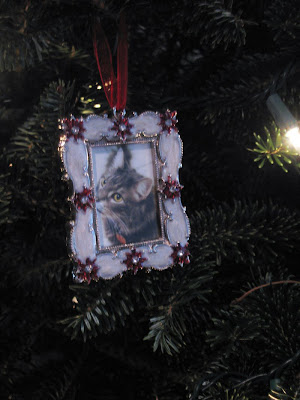 There are some other special ornaments on there as well…I put this photo of Hamlet on the tree last year, after we lost him to bone cancer right before Christmas last year. 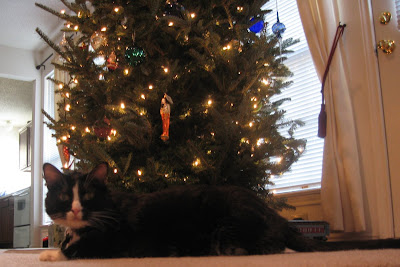 And this year I had a helper with the decorating…Romeo. 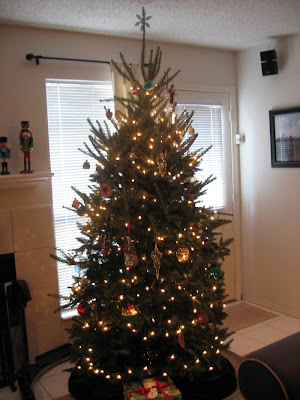 You can also see that we have a train going around the base of the tree. It’s Eric’s Polar Express. 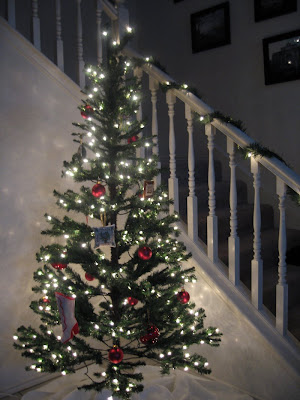 This year I also decided that I really wanted to have a second smaller tree in the entry. I had initially planned to fill it with all handmade ornaments, but unfortunately I didn’t get very far in that endeavor this year. I hope to have more next year, so this year I just filled in with some pretty red glass balls. This one is not a real tree, but it suits its purpose. I also did the garland around the banister again this year. 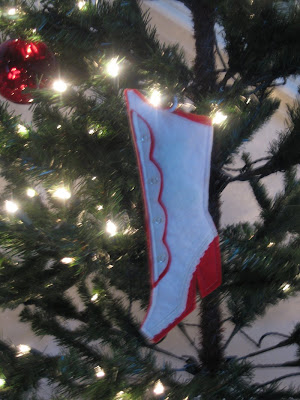 I hung this little felt stocking on it, that I’ve had since I was little. I think my aunt may have given this to me. Inside is a smaller green felt stocking that once held a stick or two of gum. 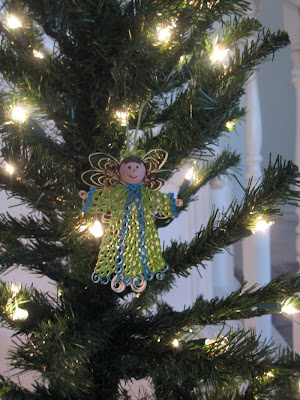 This is the quilled ornament that my friend, Sherri, made for me years ago. Such a fragile little piece. 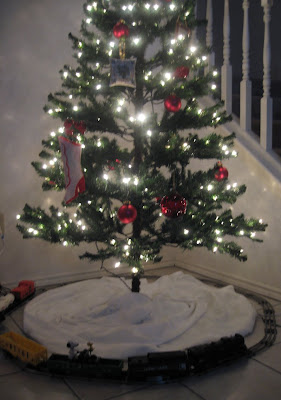 Eric put another little train at the base of this tree too. 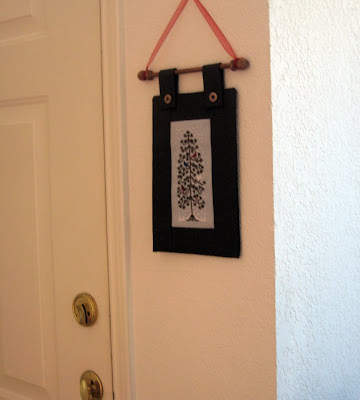 And I hung my First Snow piece near the front door. There are little birds on the branches of the trees. 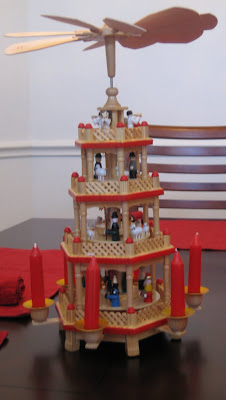 In the dining room, I have my little nativity carousel in the center of the table.

And my Dickens Village on the buffet table. Eric bought me a new piece this year, so now I have three little buildings.
That’s all the decorating we did inside the house, but Eric put lights outside again this year too – just a little bit different than the past couple of years… 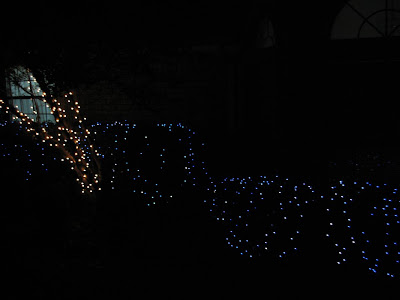 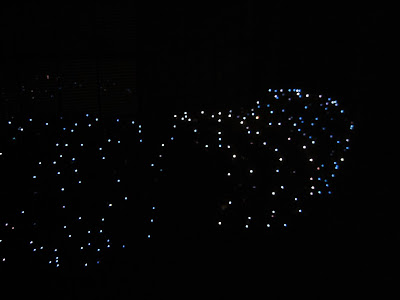 Merry Christmas, and thank you for stepping into my home for a few minutes!